A Tale of Two Salads

When it gets to this point in the summer, I start getting bored the same old meals.  We’ve done all sorts of stuff on the grill, and served it with all kinds of sides, so I’m always looking for new twists on old basics.  I started with an alternative to caprese salad, and followed with a new take on potato salad.  Both recipes are below. 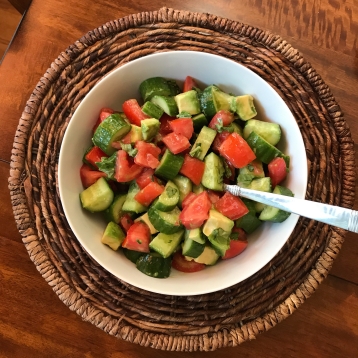 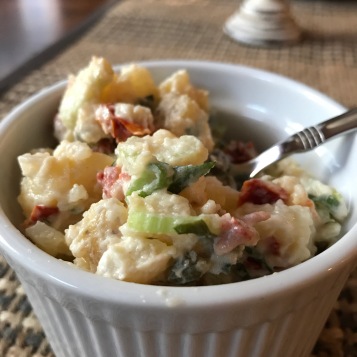 I prepare caprese salads often because the fresh tomatoes and basil are so flavorful this time of year, however you can only eat so many of them.  Same with cucumbers – I usually do a very simple vinegar cucumber salad with dill, but to be honest, I’ve worn that one out.  I did mix up my caprese a few weeks ago by adding sliced cucumber between layers of tomato, basil, and mozzarella, then drizzled with balsamic glaze (as shown in the featured picture).  It was a nice change, but I wanted to do something without cheese.  So I pulled together the tomato and cucumber into one very simple and light salad.

I prefer to use the long skinny English cucumbers, or the cute little Persian cucumbers.  Their skins are not tough, and they have fewer and smaller seeds.  You can, of course, use regular cucumbers which are more widely available during the summer, but you’ll probably want to peel them and remove the seeds.  For the tomatoes, I try to find firmer ones that can hold up in a salad without being mushy.  Same with the avocado – you don’t want this overly ripe and soft.  A little firmer and not quite as ripe will hold up better
.

Cut the cucumber and tomatoes into small bit-sized chunks.  Place them in a large bowl.  In a separate, small bowl, whisk together the vinegars, oil, salt and pepper.  Pour over the tomatoes and cucumbers, cover and refrigerate for about an hour.  Cut the avocado into similar sized chunks as the tomato and cucumber, and mince the basil.  Immediately before serving, gently fold in the avocados and basil leaves.  If you eat dairy, this is nice with feta cheese sprinkled on top (but it’s perfectly delicious without!).

Potato salad is another summer staple that I find boring year-round, to be honest.  I mean, it’s not that I dislike it, because I do in fact like it.  It’s just that it’s one of those items that has been served at every picnic and cookout I’ve been to for about 40 years.  Everyone has their favorite version of it, probably handed down through the years.  The one made with a yellow mustard-mayo based dressing is the usual suspect, but sometimes someone will show up with a sour cream based salad made with red potatoes instead of russets or golds; good and a nice change if you can tolerate dairy.  German potato salad, served warm with bacon and a vinegar based dressing is another tasty option, but I hate the way the house smells after preparing it.

This version I whipped up on a whim, without a plan and using what I had in  the fridge.  The end result was a hit with the family. 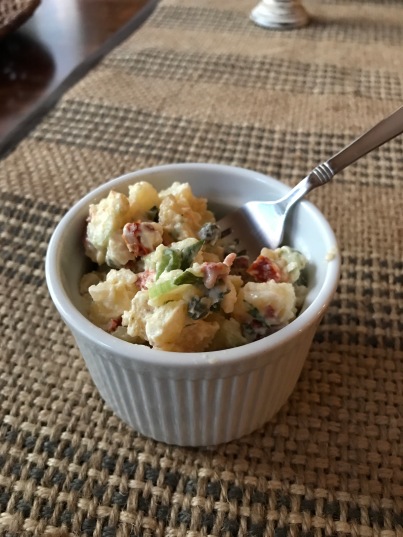 Boil the potatoes, whole, in salted water until they are tender when pierced with a fork but not mushy.  Drain and allow to cool completely.  Once the potatoes have cooled, peel and cut into small chunks and place in a large bowl.  Drizzle the apple cider vinegar over the potatoes and allow to sit for a few minutes.   In a small bowl, whisk together the red wine vinegar and sugar until it is completely dissolved, then whisk into the mayo.  Add the celery and sun dried tomatoes to the potatoes then gently fold in the mayo mixture, coating each piece of potato, then fold in the tarragon.