A Day of Remembrance

It’s hard to believe that the attack happened 16 years ago, because I remember that day so vividly.  I was sitting in my cubicle at a Fortune 500 company in Atlanta, GA.  I was supposed to be on a plane from Washington D.C. to Atlanta, GA, but our project wrapped up early and I ended up coming home a day early.  I flew in and out of Reagan National Airport in the days before the attacks, and when the rest of the country’s airports re-opened, Reagan National remained closed for security reasons due to its proximity to the White House and the Capitol.  I got out early.  I was lucky.

A colleague of mine, Cristina, is the first person I remember hearing the news from.  She said, “The Twin Towers were on fire.”  At that point, we didn’t know why or the extent of the damage.  The Internet was so slow it took several minutes to bring up the news on our laptops, and even slower to refresh the pages.  We were all desperate to know what was going on. I tried making a couple calls with my cellphone, but it was hard to get through to anyone.  Once we all knew that it was a terrorist attack, the atmosphere in the building started to change.

I was responsible for technical support for some of our executives back then.  They were all in a meeting in a conference room on another floor.  I felt I should alert someone in that meeting about the news.  Remember, this was a time before everyone had “smartphones.”  This was even before the time when we deployed Blackberry phones to our leadership.  Most of the folks in that meeting room had absolutely no idea, except for our CIO, who was standing outside the conference room with one of the administrative assistants, trying to get additional information.  Our CIO went in and announced the news.

Meanwhile, my boss was busy setting up another conference room with a live news feed so our leadership could assemble there to monitor the situation.  However, as news started to spread about the nature of the attacks, many people in our building chose to leave.  We worked for an iconic American brand in a major metropolitan area, so you can imagine that fear set in.  What if the attacks continue?  After finally being able to check in with my parents (who weren’t sure if I was still in Washington D.C. or back in Atlanta) and some of my friends in the New York and D.C. area, I made the decision to go home.  There was nothing I could do, no work was being done, and all I wanted to do was pick up my kids from the daycare center and go home.

The rest of the day and evening was spent watching the coverage on T.V.  I felt pretty safe at that point, knowing that our military was protecting us, and the likelihood of another attack was very low.  But I worried about going to war and the ramifications that would have on our country.  I spent some time exchanging email with friends and colleagues, and knew that all of them were safe and accounted for.  Some were stranded away from home on business, but were making arrangements to rent cars or ride buses to get back home.   There was an uncertainty about what the next weeks would be like, and that uncertainty hovered over everyone in our country.

My kids were too young to remember that day, at just 2 and 4 years old.  However, last Thanksgiving we took a family vacation to New York City.  We spent a day at the World Trade Center Memorial and it was so impactful to all of us.  Walking through the exhibits with them, talking to them about what we were doing that day, what was going through our minds, helped to paint a picture for them of a day they have no real memory of.  My oldest daughter posted today that visiting the memorial was “life changing” for her.  That brought a tear to my eye.  You never know what is sinking in and what isn’t during family trips with teens, and to hear that this made such a big impact on her made me so happy.

If you haven’t been to the Memorial, it is a must see.  I was torn about going, but so glad that we did.  It’s a somber place, with people speaking in hushed tones.  The architecture is perfect – the way it was constructed on the same ground, incorporating leftover beams and elements of the original buildings.  You can take pictures is this open area, which includes a firetruck that was destroyed when the towers came down.  However, once you pass through the doors to the inner exhibits, cameras are not allowed.  I liked this – it makes you focus on what’s around you, taking it in with all of your senses, rather than through the lens of your camera phone, taking pictures.  Not to mention the fact that the place feels sacred, and the act of taking pictures seems disrespectful.

The sheer amount of artifacts is mind boggling – wallets, singed paperwork, jewelry, and clothing – thinking about the people who last touched these items before their world changed, and in many cases ended.  I have no idea how long we spent in there gazing at photographs, reading the placards, and watching videos.  I remember being in a sort of haze, going from object to object, trying to take it all in.  It was sobering and it was haunting. 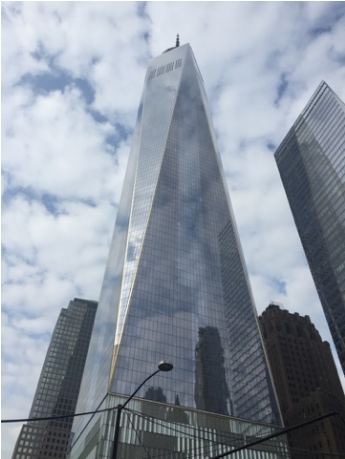 The single exhibit that pushed me to the limits of my emotional ability to take in all around me was the exhibit about Flight 93, the flight that went down in a field in Pennsylvania after some very brave passengers decided to take matters into their own hands.  When I wandered up to the exhibit, I saw the complete transcript, typed and printed in a booklet.  I stood there and read it in its entirety while audio and video played in the room behind me.  It turns out that the hijackers on this flight hit the wrong button, and ended up broadcasting to air traffic control and other planes nearby instead of just playing the announcements they made to the passengers in the cabin.  The entire thing is recorded, and much of it is played in the exhibit.  Thankfully they cut out certain points during the fighting – I don’t know that many people would be able to handle it, considering how difficult it was to simply read it.  They also played voice mail messages left by crew and passengers on loved one’s phones – last words, expressing their love and saying good-bye.

It was too much.

It’s a good thing there are tissues strategically placed throughout the museum.

There is also a section near the end about the hijackers, and looking at photographs of them smiling with their flying class instructors and classmates sent shivers down my spine.  There were the photos of them entering the airports and narratives around the last 24 hours leading up to the event – what they did, who they contacted, how their plan played out.

This year, on the 16th anniversary, while I still remember my day like it was yesterday, I have a different perspective on the day.  All of the images from the memorial keep circling around in my head – first responders, crushed street signs, personal items, photos of victims and heroes and burning buildings. Outside, the names of all of the victims are displayed and a white rose is placed at their names on their birthdays.  While our country will never forget, I feel like my remembrance is less of the impact, the burning, and the collapse, and more of the people, their stories, and their memories since visiting the memorial.  New York City is an amazing place, so much so that I want to plan another trip because I feel like I just didn’t see and experience as much as I wanted to. But if there is one must-see that I would pick, it’s the World Trade Center Memorial.  I promise you it will pull at your heart about a 1,000 times more than the Statue of Liberty or the Empire State Building.  You should visit those too, but don’t miss the World Trade Center.