If you like reading suspenseful books, with unexpected twists, The Woman in the Window is for you.  It was also this month’s Book Club selection, and all of us enjoyed it.  It’s the story of an agoraphobic psychiatrist who fills her days with old movies, online chats, and spying on her neighbors through the lens of her camera.  Her peeping tom tendencies land her in the middle of a mystery so strange, she is forced to question which experience are real, and which are hallucinations.

The Woman in the Window: A Novel

A modern day story of someone suffering from agoraphobia is interesting – with the Internet and delivery services, it’s actually fairly easy to be self sufficient and never leave the house.  In the book, the main character, Dr. Anna Fox, is able to have all of her groceries, prescriptions, and even her favorite beverage (merlot) delivered to her upscale brownstone in Harlem.  Her shrink and physical therapist provide home visits, and her social life if filled with online support groups, chess matches, and French lessons.

Anna is also an alcoholic, drinking red wine all day long and mixing it with her prescription drugs.  This, combined with her fascination of old classic movies plays out in a weird, groggy fashion that had me, as a reader, questioning at times what was Anna’s reality, and what was part of her imagination.  This theme plays out throughout the entire book, and ends up twisting and turning to a surprise ending.  It does get very intense towards the end, which was a good thing because I was growing wearing of reading 1,000 different ways to describe the feeling of merlot going down her throat.  I have to admit, even though I enjoyed the book, the whole “let’s describe the way the merlot feels in Anna’s mouth as much as possible” was waaaaay overdone.

The surprising thing about this book (besides the plot twist – which I don’t want to give away) was that it was written by a man, but told from the point of view of a woman.  I would never have guessed that a man wrote this book because the voice was so authentically feminine.  A.J. Finn did a fantastic job in this aspect.  It was an easy read, suspenseful and overall I enjoyed it, as did the other ladies in my book club.  We had a smaller group this week – just four of us – but that in no way hindered the lively discussion we had, not only about the book, but about dozens of other topics.

Besides the great conversation, we had quite the spread, as we usually do.  Cindie brought boeuf bourguignon that she prepared in her Le Creuset dutch oven.  It was so good – the meat fork tender.  I imagine it would probably go great with a nice crusty bread or some chewy gnocchi.  Jacqueline made a gooey reuben dip that was to die for – I even brought some left overs home to snack on.  Dana, our hostess with the mostest put out a beautiful tray of freshly sliced veggies, spinach dip, homemade guac, and a buffalo pheasant dip – just like buffalo chicken dip, which she jokingly referred to as a “farm to table” dip since her husband provided the pheasant from a hunting trip.  And of course, in honor of the main character, we drank merlot!

I brought a Mandarin Orange and Chicken Spinach and Rice Salad with a Ginger Dressing that I made with coconut aminos in order for it to be gluten free for our GF bookclub friend.  I usually opt for tamari as a soy sauce replacement, but saw coconut aminos at Trader Joe’s and thought I’d give it a try.  It’s a perfectly good sub for soy sauce (except my damn auto correct keeps changing it to “amigos”).

I also whipped up a variation on an old school dessert my mom used to make.  In its original form, it was angel food cake, and whipped cream with cocoa powder mixed in.  Since I can’t have real whipped cream, I opted for Cool Whip and also mixed in some marshmallow cream to make it a little creamier.  It was a hit – and its so easy to make last minute with a store-bought angel food cake.

I’ve included both recipes below – I hope you enjoy them!

Cook your rice and set it aside to cool.  If you have leftover rice in the refrigerator, this is a great way to use it up!

Heat the olive oil and sesame oil over medium high heat.  Add the chicken slices, stir to coat in the oil, then season with the salt, pepper, garlic powder and ginger powder.  Cook, moving the chicken around the pan, until no longer pink and slightly golden for 3-4 minutes.  Remove from heat and allow to cool.

While the chicken cools, prepare the ginger dressing.  Whisk the vinegar, honey, coconut aminos and oils in a small bowl.  Add the garlic powder and fresh ginger, then whisk again until mixed.  Season with salt and pepper to taste.

Once the chicken has cooled, place it with the cooled rice in a large mixing bowl.  Drizzle the ginger dressing over the chicken and rice, and gently toss, coating the mixture with the dressing.  Add the drained oranges, spinach, and chives, and toss gently.  Just before serving, add the chow mein noodles and almond slices, and toss.  *Note:  if making ahead of time, do not add the spinach, noodles, or almonds.  Add all other ingredients and keep in the refrigerator.  Just before serving, add the spinach, noodles, and almonds.  This will prevent them from becoming soggy.

*Note about ginger:  You must use fresh ginger for this dressing; powdered simply won’t do, however it’s perfectly fine to season the chicken.  Ginger is cheap and keeps in the freezer for quite a while (I honestly don’t know how long because I use so much of it).  You don’t need to peel it:  simply pull the ginger from the freezer and grate it directly into whatever you are making.  I use a microplane for grating, as it produces nice, fine shreds.

Carefully slice the top inch off the angel food cake and set aside.  Using a fork, hollow out a tunnel around the cake, careful to not go all the way through the bottom of the cake.  Carefully spoon some of the chocolate whipped cream into the tunnel, then gently replace the top on the cake.  Use the remaining chocolate whipped cream to frost the outside of the cake.  Store in the refrigerator until ready to serve.  Goes great with fresh strawberries!  To slice, be sure to use a sharp serrated knife so you don’t squish the cake! 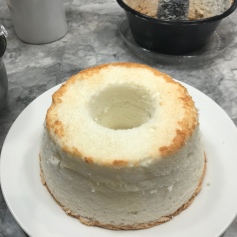