Our next destination was Padua (Padova in Italian), about 25 miles from Venice.  The purpose of our stop here was to attend a Dave Matthews Band concert, since my husband is a HUGE DMB fan.  After checking out of our hotel in Venice, we rolled our luggage over the bridge to the train station and purchased 2 tickets to Padova from a self-service Trenitalia kiosk.  We decided to splurge and bought first class tickets, which gave us access to the lounge at the train station where we had some sandwiches and drinks before boarding. Since it was such a short ride, and since the Trenitalia trains are so nice and clean, first class really wasn’t necessary, but it was nice and we were on vacation so why not.  After arriving at the train station in Padova we found a taxi to take us to our hotel, Art Hotel Al Fagiano which is located near St. Anthony’s Basilica.

The hotel was very quirky – with strange modern art all over in an ancient building with small hallways making you feel as if you were in a maze.  Even though it’s small, we actually got “lost” for a minute and couldn’t find our room after returning in the afternoon because it was situated down a corridor off the “main” area of the building.  Our room here was small and what I would consider more typical of a hotel in Europe than our spacious, modern place in Venice.  However, it did have a king size bed in it.  The shower was tiny and being a small person, I wondered how anyone larger than me would fit in it!  We were able to check in immediately, but it took quite a while. The woman at the front desk as very eccentric, and spoke English well enough that we could communicate, but it seemed to take her forever to pull up our reservation and get us checked in. She then escorted us up to our room, which used an actual key, not a key card.  We dropped off our stuff and set out to find a bite to eat and something to do.

We stopped at a little café across the street from our hotel, right next to the basilica.  A lovely older gentleman was running the place. We got a snack and headed over to the Botanical Gardens (Orto Bontanico) for the afternoon.  This isn’t just any botanical garden – this is the FIRST botanical garden in the world, created in 1545.  It is also on the UNESCO World Heritage List.  While the original layout is preserved, it also has a modern biodiversity garden and greenhouse with plants and artifacts from around the world.  We spent over an hour here and really enjoyed it.  It’s a very peaceful, beautiful place to spend an afternoon.  I think it was about 10 or 15 Euros to get in, but well worth it. 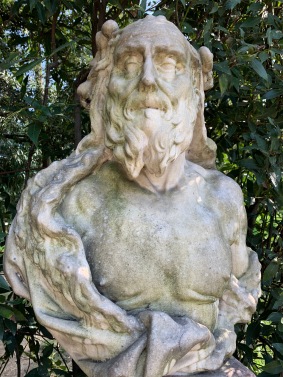 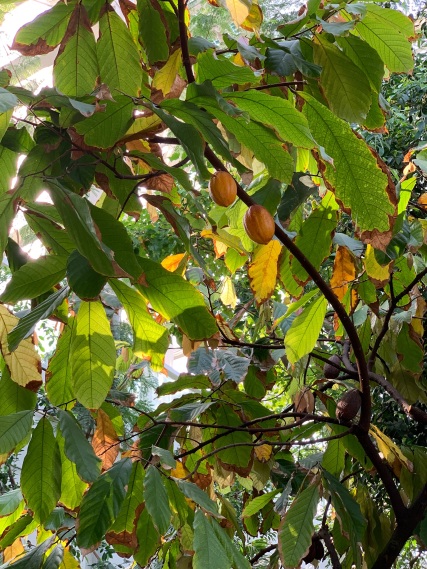 We then walked over to Via Roma, a pedestrian street lined with shops, cafes, and gelato places and filled with TONS of people – tourists and students alike.  We had some “fast food Italian” at a place called Bigoi where I had Cacio e Pepe and Chip had Bolognese. You just pick the sauce and they heat up the pasta, throw it in a to-go cup with the sauce of your choice.  There are no seats – you stand at a counter to eat or just take it with you.  It was very good – but nothing like the pastas we had at sit-down restaurants.  And definitely better than the “fast food” we’re used to! 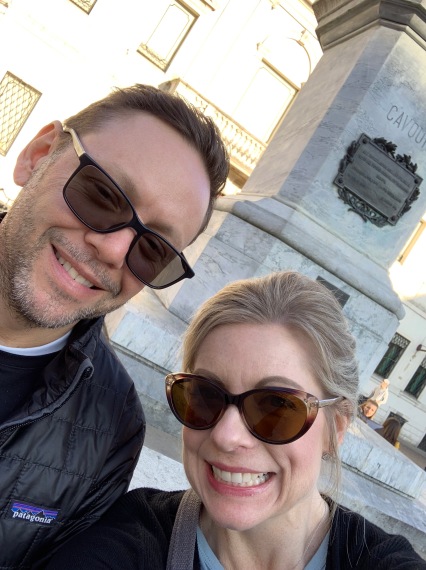 This was our first time attending a concert in Europe, and it is definitely a different experience from attending concerts in the U.S.  The show was at the Gran Teatro Geox, which is outside of the main area of Padova and not accessible by city bus, so we took a taxi for less than 10 euros.  It’s a small venue, with what looked like less than 2500 seats, and appears to be more of a large permanent “tent” than an arena, however it is indoor and climate controlled with modern, clean bathrooms.  It is relatively new, constructed in 2009, which may explain why it is on the outskirts of town.  There were Ticketmaster staff onsite, dressed in nice blue suits (very European!) and it was very easy to get in and find our seats.  There was lots of food and drink to choose from, however it was chaos! There was one line to place your order and pay, then another line to pick up drinks, and another line to pick up food.  They had lots of traditional Italian style sandwiches and pizza as well as chips and other snacks and a full bar, but it took a while to get our order.

There was no opening act, so the show started right on time.  We had seats on the aisle of the second row, behind the general admission floor area, which in other places would have been great, however in Italy when you have a seat, you are expected to sit.  Even at a rock show!  So when the music started and some of us were standing, angry people in the rows behind us yelled for us to sit down.  The ladies in the row in front of us immediately left and went to the floor so they could dance and enjoy the music.  We stayed in our seats for the first half of the show, but then gave them up and went to the floor.  I mean, it’s really hard to just SIT and listen to music!

It ended up being a great show, but the second lesson of the night came when it was time to leave:  While some people did drive, there were about 800-900 people waiting for taxis, since there were no city buses out there.  Complete chaos!  And, there is no Uber or Lyft so we had to wait for over an hour to finally get a taxi.  The city of Padova and the venue really need to figure this out, like offering shuttles from specific locations in the city.  We ended up with a surly taxi driver who was wearing too much cologne and looked like a character on Jersey Shore, but we were just happy to finally have a ride back to the hotel so we could get some sleep.

Leaving Padova
We left the next day, which happened to be Sunday so there was a lot of activity on the square in front of the Basilica. We went back to the same café for some pastries and sandwiches.  Before finding a taxi to the train station, I had to use the bathroom, and was surprised to find a non-modern “hole in the floor” or “squatty potty” that I had seen pictures of but had never seen in real life before.  This was the only bathroom of this type we encountered during our 10 days in Italy, but I really had to go, so I made the best of it.  It was clean, so I really couldn’t complain; it was just awkward for this American girl.  Once at the train station, we opted again for the first class tickets for our trip to Bologna (I didn’t think it was necessary, but it’s what my husband wanted, and the train tickets are relatively cheap).  It was a short stay in the lovely little town of Padova, but definitely an enjoyable one. 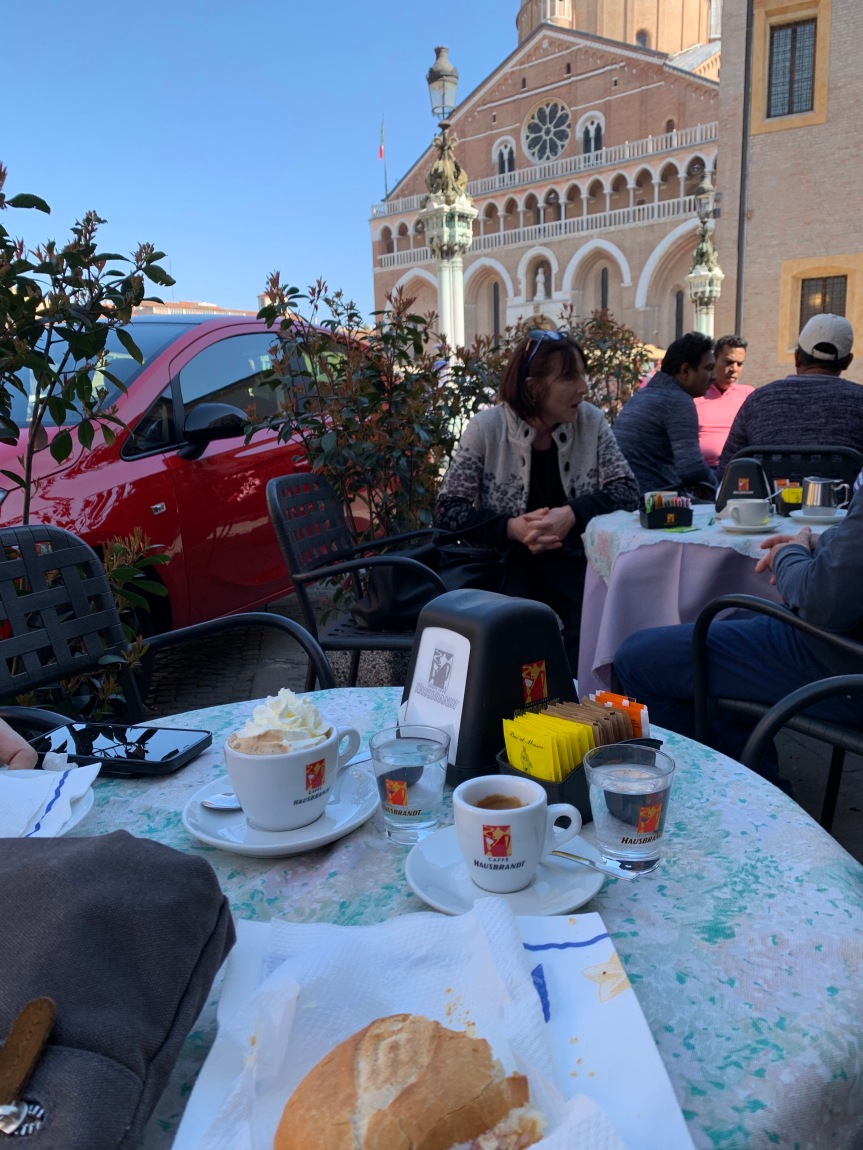 Coffee on the square

We were in Padova for such a short amount of time (24 hours!) and primarily there for a concert, so there were several things on the list that we didn’t have time to do including Scrovegni Chapel (a church famous for its interior frescoes), Prato Della Valle (largest square in Italy boasting 90 statues of historical figures), and Piazza dei Signori.