Late last summer, I shared with you my 2018 Reading List.  I left off on All the Light We Cannot See, as I still had that one “in progress.”  I did finish it, as well as one additional book, The Great Alone written by Kristin Hannah who also wrote The Nightingale which was on my 2018 list. So I’m going to start my 2019 list with both of these books, in addition to the others I have completed, and my list of what’ coming up next. 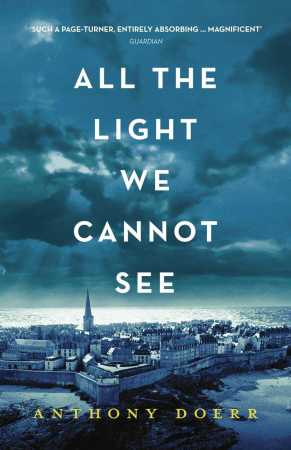 All the Light We Cannot See by Anthony Doerr

I’m going to be honest (and I know I’m going to make some of you mad) but I liked the Kristin Hannah book (The Nightingale) better.  They are very similar novels, not just because they take both place in France during WWII, but also because the narratives both have heroes who display great bravery and strength in the face of dire situations. The story follows the journey of a special jewel from the museum where the father of Marie-Laure, a young blind Parisian girl, works.  In parallel, we follow the story of Wener Pfenig, a young German boy who joins the military.  Their stories are interwoven in a magical turn of events the culminates in the walled sea-side town of Saint-Malo in France.   I felt that the Hannah book told the story in a more lyrical fashion and did a better job at eliciting emotion from the reader.  While Doerr does this, I felt it wasn’t executed on the same level.  The other difference with All the Light is it has super-natural themes that give it a slightly more magical vibe versus the gritty realism in The Nightingale.  Don’t get me wrong – there is plenty of grit in this novel as well, and I really did enjoy it.  But if I had to choose between the two, well…

The Great Alone by Kristin Hannah

Going back to this fabulous writer for another Book Club read, I was struck by how completely different this book read from The Nightingale.  In fact, I had to close the covers and look again to make sure it was the same writer.  The Great Alone is a completely different story, in a different location, during a different time period with different characters and language and conflict. The tone, at first, seemed to be that of a different writer.  But then as I settled in, I started to notice some common themes:  strong female characters who are survivors; an extremely violent and abusive male character; harsh living conditions.  It was halfway through the book when I said, yes, this is the same writer!  This story takes place in the 70’s in the states of Washington and Alaska, with the bulk of the story situated in Alaska.  It’s the story of a broken man’s desire to start fresh and his inability to conquer his demons, forcing his teenage daughter into a life of just trying to survive both the harsh elements of the Alaskan wilderness as well as his violent behavior.  I enjoyed trying to pinpoint on Google maps their location in Alaska, and the searched for photos of the area, and everything looked remarkably as I visualized it in my head while reading. This was a really good book, and I highly recommend it.

All the Ever Afters: The Untold Story of Cinderella’s Stepmother

This was a book I read on my own, as I had finished up the Book Club books and needed something else a bit different to take me into the new year.  I had grown tired of WWII (no matter how good all the books have been, I needed a new setting and time period!), and needed something not quite as dark, that might be “fun.”  Based on reviews I read online, I chose this.  While it is definitely fun to read, I would be lying if I said it wasn’t dark.  It’s not as dark as The Great Alone, but there is plenty of struggle, survival, tragedy, and violence in it.  It’s really a clever book written from the point of view of Cinderella’s stepmother, that tells her story, not Cinderella’s and this, of course, changes your opinion of her.  The story starts when she is just a little girl, who is sent away from home to go work as a servant at a manor house because her father cannot afford to feed her. Even though she is a young, inexperienced girl, she is very clever and ends up getting another position at an abbey.  A series of unfortunate events over the years eventually lands her back at the manor over a decade later where she manages to work her way into a position of authority, demanding respect.  She chalks up much of the traditional story to rumors and misunderstandings, which ends up portraying her and her daughters as the victims in the end. While derived from a childhood fairy tale, this is not a children’s story as there are adult situations, sex, and some domestic abuse that make this story one for adults.  I found the story clever, with attention to small details that tie everything together.  A fun read! 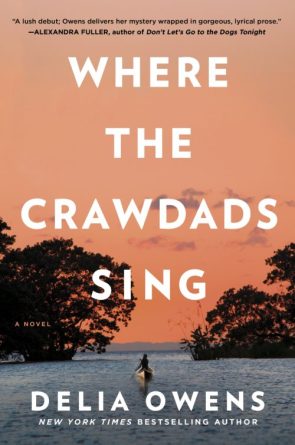 Where the Crawdads Sing by Delia Owens

This book is hot right now, and appears to be on every book club’s reading list, including mine.  I think there’s a few reasons for this, first it’s an easy read – it doesn’t get too deep or heavy and doesn’t have GRE words that need to be looked up in the dictionary.  I plowed through this thing in a matter of days.  Second, it’s accessible – by that I mean that even though the life of the main character, Kya, is not something most of us can relate to, her loneliness is something that lots of people can relate to and sympathize with.  It’s a basic human condition that on one hand while you read, you understand and on the other hand, you feel grateful that your moments of loneliness aren’t nearly as bad as Kya’s.  Oh, and Reese Witherspoon raved about it, prompting lots of people to seek it out (minor detail), and it was featured on CBS Sunday morning.  So, there’s that.

This is a good book, and I do recommend it, but I had a couple of problems with it.  First, every-other chapter is focused on the investigation by a small-town sheriff and his deputy of a murder that took place. These chapters were my least favorite part of the book because they were so cliché.  The characters are portrayed as not-very-smart small town cops with an axe to grind.  I found these characters to be caricatures of real-life law enforcement, and frankly was turned off.  Knowing that this book is being made into a movie, I’m already cringing at how this portrayal is going to come off on the big screen.  My second problem with the book I don’t want to expound upon, as it may give away a very important secret at the end of the book.  Let’s just say that I became annoyed with Kya’s sudden need to constantly quote poetry (mediocre poetry, not even critically acclaimed) throughout the last quarter of the book.  I saw it as almost trite, that her academic and literary “awakening” had sparked this need.  Eventually I was able to come to terms with this, and if you’ve read the book, you know why.  The other bit, which is minor, is the story’s “believability.”  How likely is it that this child raised herself without becoming a ward of the state?  Or being taken in by another family?  I know she was wild (and hard to catch) but still, does this (or did this) really happen? Don’t let my criticism dissuade you – it is a good book, and you should read it, because it just may make you think about things (loneliness, abuse, nature, human interactions) a bit differently.

An Man Called Ove by Fredrik Backman.  This is not a book club book, but one my sister recommended.  So far, I am enjoying this book, and am tickled by Ove’s grouchy demeanor.  Can’t wait to finish it!

What are you reading? Any recommendations?