I’m going to cut to the chase right here:  these are so freaking good.  You should make some.  Now.

I first made these for Book Club about 8 years ago, and I honestly don’t recall making them since.  Why have I been holding out?  Book Club 2.0 is tonight at Dana’s house.  Since I’m spending the day moving Child #2 into her first apartment, I decided it was in my best interest to get a head start by preparing the Book Club goodies the night before.  I decided to bring these cupcakes and homemade Pineapple Salsa.  I had both completed and ready to go by Friday evening, so I didn’t need to even think about them on Saturday.  Since they were sitting on the counter, ,y husband, who is both dairy free and gluten free, couldn’t resist.  He ate some of the poison.  The yummy, yummy poison.  And he claims whatever ill effects he experienced were completely worth it.  This recipe make about 2 ½ to 3 dozen, depending on how full you fill the cupcake batter.  I got exactly 33 cupcakes when I made them, just under 3 dozen which is enough to take to Book Club, and still allow me to leave a few at Child #2’s apartment. 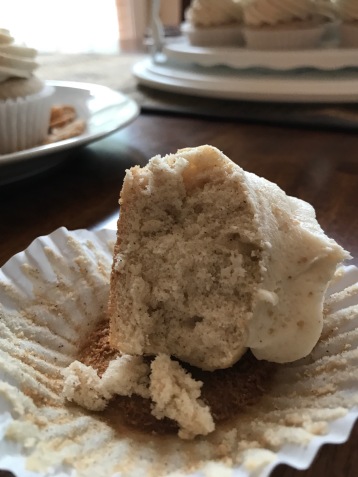 There are a few different versions of this recipe out there.  I use the recipe from Your Cup of Cake, with a couple very minor tweaks.  The original recipe is HERE.   There is a note in the recipe that the use of the cereal in the actual cupcakes was removed, based on user feedback.  I did not use the cereal in the cupcakes either; only in the icing.  Also, I make my cake slightly different.  I do start with a boxed cake, but I don’t use any oil and instead use just sour cream, eggs, and water.  And don’t turn up your nose to the boxed cake mix; consider it an ingredient.  This semi-homemade recipe is worth it, so don’t be judgmental!

A couple notes:  I do use a piece of cereal to top each cupcake, BUT I don’t put it on until right before serving, because the piece of cereal gets soft sitting in the icing.  Also, I use a little bit more powdered sugar in my icing to make it just slightly stiffer, but every bit as creamy.

Heat oven to 350 degrees and line cupcake pans with cupcake liners.  Whisk together the cake mix, flour, sugar, and cinnamon in a large bowl.  In a separate bowl, whisk the eggs, sour cream, and water.  Pour the liquid into the dry mixture, slowly, mixing with an electric mixer on low for about 30 seconds until mixed together. Move the mixer to High speed and mix for 2 minutes.  Line cupcake pans with cupcake papers.  Using an ice cream scoop, fill each cupcake 2/3 full with batter.  Bake for 15 minutes at 350 degrees, or until done.  Move to cooling racks to cool completely.

Make the icing:  place the cream cheese and butter in a bowl and beat until fluffy.  Add the vanilla and mix in.  Add the powdered Cinnamon Toast Crunch and beat for 2 minutes.  Stop the mixer, add the powdered sugar and drizzle 1 Tablespoon of water over the top, then mix on low for a minute.  Stop, scrape down sides, and mix on high for 2-2 minutes or until fluffy.    Pipe onto cooled cupcakes and top each with a piece of cereal.

*I use a mini food processor (the Cuisinart Mini Prep) to completely pulverize the cereal into a powder.  If you don’t have a food processor, you can crush them in a large zip top bag with a rolling pin, then sift the crumbs it to get out any big pieces of cereal so you have a fine powder.