Last weekend, we were supposed to have a house warming/pool party.  The invitations were sent, folks RSVP’d, I bought cups and chips and wine and beer and bug spray.  I was so excited.  And then it proceeded to rain for 4 consecutive days.  Not just rain, but POUR.  On Thursday, the forecast for the weekend wasn’t looking good, so I canceled the party.  I knew that after all the clouds and rain that the pool would be cold, and our yard was swampy so there would be mud tracked in the new house and mosquitos biting.  I didn’t want to take the chance of another downpour on the day of the party.

And when Saturday came, it was suddenly sunny and hot.  Of course.  I can’t win. 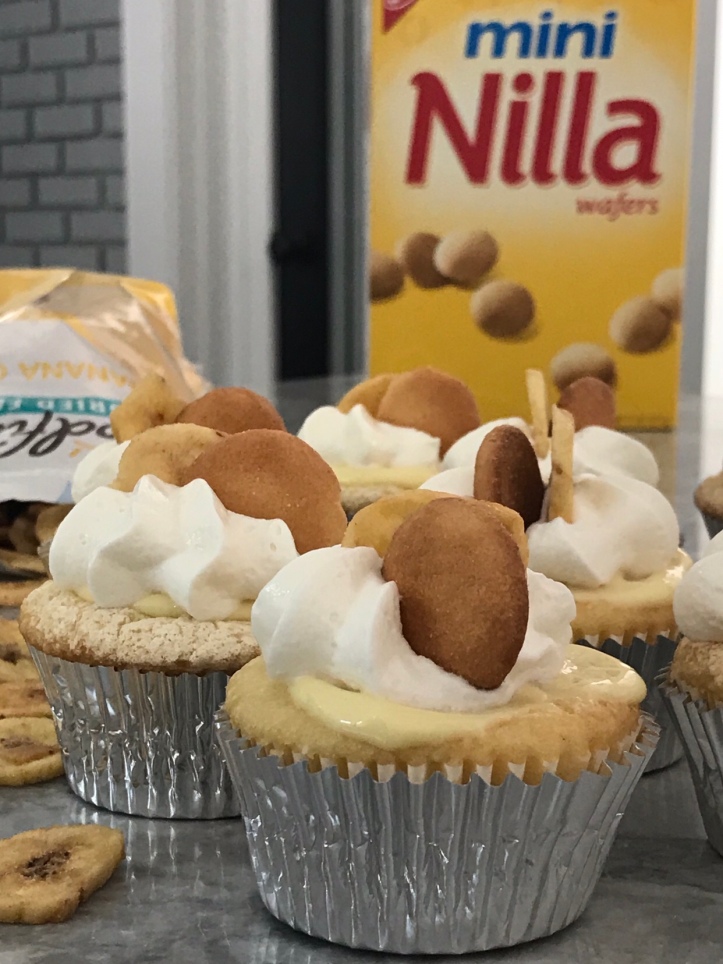 I planned on making cupcakes for the party, since I’m sort of  known for my cupcakes.  I was having a hard time deciding which kind, however.  The last party I went to, I took my Lemon Cupcakes, and a few months back I made my Cinnamon Toast Crunch cupcakes for Book Club.  And, I recently made a batch of  Strawberry Cupcakes last spring for my daughter’s birthday, so I knew I didn’t want to make any of those.  I considered doing my Chocolate Chip Cookie Dough cupcakes, since those are always a big hit, but they are a bit labor intensive, and I had plenty of other things to do to prep for the party.  I finally decided that Banana Pudding Cupcakes would be perfect for a summer party.  But, since the party didn’t happen, and I had all of the ingredients, I decided to make them for Book Club this weekend.

I made the cupcakes and the pudding a day in advance, storing the cupcakes in an airtight container at room temperature, and refrigerating the pudding.  I didn’t fill them or top them until the day I planned to serve them.  The Nilla Wafers will soften while sitting in the whipped topping, so if you want them crunchy, be sure to add those last.  I piped Cool Whip on top, however you can just use a spoon to add a dollop if you wish.  One tub of Cool Whip topped exactly 24 cupcakes.

Whisk the cake mix, flour, and sugar in a large bowl.  In a separate bowl, mix the sour cream, eggs, and water.  Pour the liquid mixture into the dry and beat on low for 30 seconds.  Scrape the sides of the bowl, add the banana extract, and beat on high for two minutes.  Scoop the batter into lined cupcake pans (you’ll get approximately 24-30 cupcakes).  Bake at 350 degrees for 15-18 minutes or until done.  Cool on cooling racks.

In a large bowl, mix the sweetened condensed milk and cream cheese with an electric mixer until smooth.  Set aside.  In a separate bowl, whisk the pudding mix and milk until smooth.  Add the pudding to the cream cheese mixture, along with the vanilla and banana extracts and beat with the mixer until creamy and smooth.  Cover and chill in refrigerator for at least 30 minutes, or overnight.

Create a well in the middle of each cupcake by removing a small core of cake using a cupcake corer, or the end of a piping tip. Do not cut all the way through – leave some cake at the bottom so the pudding doesn’t ooze out. Spoon (or pipe) the pudding into the center of each cupcake, coming to the top and over the top of the cupcake in the center but not all the way to the edge (see picture).  Top each cupcake with a dollop of whipped topping, a Nilla wafter, and a banana chip.  Serve immediately.  Store any leftovers in an airtight container in the refrigerator for up to 3 days. 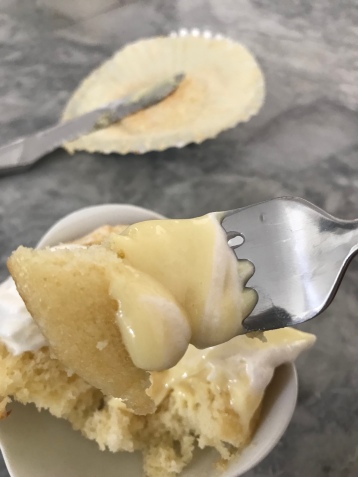 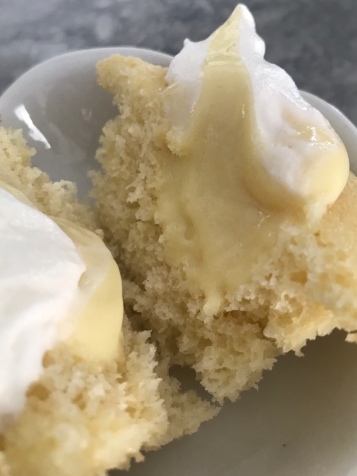