We’ve been doing so much grilling this summer, and eating so much fish since our trip to Florida, that I’ve been craving something different.  I saw some wild rice in my pantry that I had not used and though surely I could do something with that.  But what, was the question.

Being from Wisconsin/Minnesota, where wild rice is grown, it’s pretty common to see it on store shelves, especially any that cater to tourists. It’s not as common down here in the South, but you can find it in most grocery stores.  I paid $4.99 for one cup of dry, uncooked wild rice at Publix, and it is widely available at online retailers.  Since it is the official state grain of Minnesota, I decided to do a little bit of research.  And by “research” I mean I looked up a Wikipedia article.  I learned a few things, but what was most surprising to me is that the Ojibwa word for wild rice is “Manoomin” which is where my place of birth gets its name (Menomonie, WI).  Also “Minnesota” is derived from this word, as are many other places in the MN/WI/IL area.  Interesting stuff (and no, I’m not being sarcastic; I do in fact find this interesting).

I went to the grocery store to pick up a few items and see if I could get inspired to come up with something to make with my manoomin.  While I was browsing through the produce section at Publix, I saw a nice display of various types of squash.  The acorn squash caught my eye, and I thought perhaps stuffed squash would be good.  I chose 2 smallish ones of similar size (so they’d cook up in the same amount of time).  When I got to the checkout, apparently one was organic and one was regular so they were different prices which the cashier pointed out to me, but I said, “whatever.”  I decided maybe this could also be an experiment to determine if there was any difference in taste or quality.  Except I forgot which was which after removing the stickers, so the taste test didn’t really happen.  I can tell you, however, there was no visible difference and when I tasted them, no noticeable difference.  The fact that one is free of pesticides was nice to know, though. 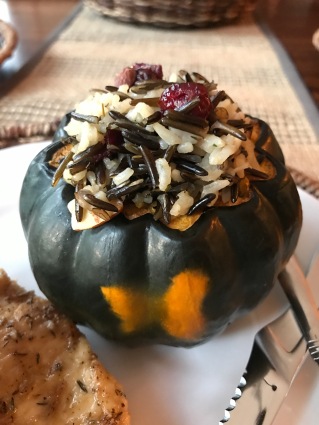 I decided I didn’t want to go with straight wild rice, and I just happened to have about a cup and a half of leftover cooked white rice in the fridge, so I decided to incorporate that as well.  You could also use prepared microwaveable rice or frozen rice, or just make up a quick batch.  After preparing it as described below, I decided it still needed something else, and I remembered that I had a bag of honey roasted almond and dried cranberry salad topping in the pantry.  This was exactly what it needed.  Of course, I would encourage you to experiment with the seasonings yourself to get it the way you like it. 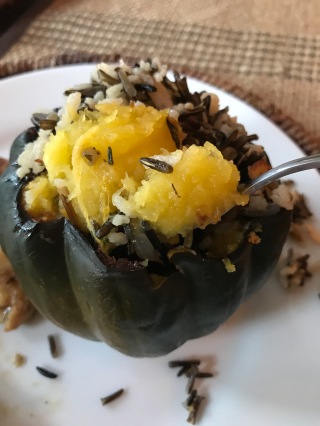 I have prepared acorn squash in the past and always chose the medium sized ones, which were a little larger than the ones I selected this time around.  When I make stuffed squash with larger specimens, I cut them in half and stuff each half.  Because these were smaller, I only cut of the top portion where the stem is, so the entire squash could be stuffed.  Also, I usually scoop out the seeds before baking and this time I did not.  I was really easy to scoop them out afterwards once the squash cooled a bit after coming out of the oven.

I decided to serve this with some gluten free pan fried chicken cutlets – the thin chicken cooks up quickly and has a nice texture to it. 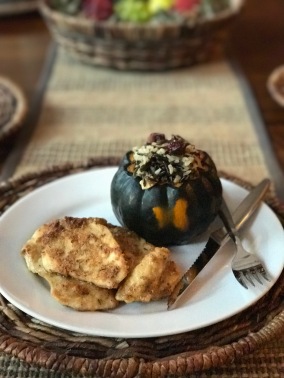 Prepare the wild rice according to the instructions on the package.  It will take about an hour for it to cook, so you’ll want to start this first.  Preheat your oven to 350 F and line a sheet pan with parchment paper.  If you are using 4 small squash, carefully cut the tops (stem side) off each of the squash, and place them cut side down on the cookie sheet.  If you are using larger squash, cut them each in half and place them cut side down.  Bake at 350 for 45-55 minutes or until the squash is easily pierced with a fork (generally, you can smell the squash when it’s ready).  Remove them from the oven to cool.

Meanwhile, dice the onion and cook in olive oil until golden.  Add the Worcestershire sauce, stirring for a few seconds as it cooks down.  Stir in the cooked white rice and broth, then add the herbs, salt, and pepper and bring to a simmer for about 5-10 minutes.   Remove from heat and set aside until the wild rice is done cooking.  Once it is ready, stir the wild rice into the white rice mixture, folding to mix well but careful to not mush the white rice.  Add in the almond-cranberry topping and sprinkle with parsley.

When the squash has cooled enough to handle, turn each one over and carefully scoop out the seeds, leaving just the orange flesh and the outer skin.  Using a spoon, stuff each squash with the wild rice mixture, lightly pressing it into the squash to pack it a bit (without mushing the squash).  This just ensures each squash gets plenty of rice inside!  If needed, return to the oven to heat for a few minutes, or serve immediately.

*If your butcher doesn’t have them, you can always ask to have them sliced, or just buy boneless skinless breasts and carefully slice them yourself, slicing horizontally.  Depending on the thickness of the breast, you can get 2-3 slices.

In a shallow bowl or plate, mix the flour with the seasoning using a fork to “sift” it until well mixed. Dredge each cutlet in the flour mixture, coating both the top and the bottom as liberally as you can.  Set each piece onto a clean plate as you coat them.  Dip each flour coated cutlet in the milk one at a time, then back to the flour for a second coat.  You don’t need a super thick coating here, just lightly coated in flour. Dispose of any unused flour and the milk.

Get another clean serving platter ready to place the cooked chicken on as it is done (I’m a stickler for avoiding cross-contamination of raw meat!!)  Swirl one tablespoon of olive oil in a large, heated skillet and add the chicken pieces in batches, letting them cook on medium high for about 3 minutes or until lightly browned.  Flip and cook until browned on the other side, then remove from the pan to the serving platter.  If needed, add more oil to the pan between batches.  You really don’t need much oil, just enough to provide enough moisture for the flour to cook into the chicken and also to prevent sticking.  I usually make this last and serve it immediately, but if you are making a larger batch, keep a cookie sheet in a warm oven (low setting or 170 F), and put the pieces in the oven to stay warm while you cook the others. 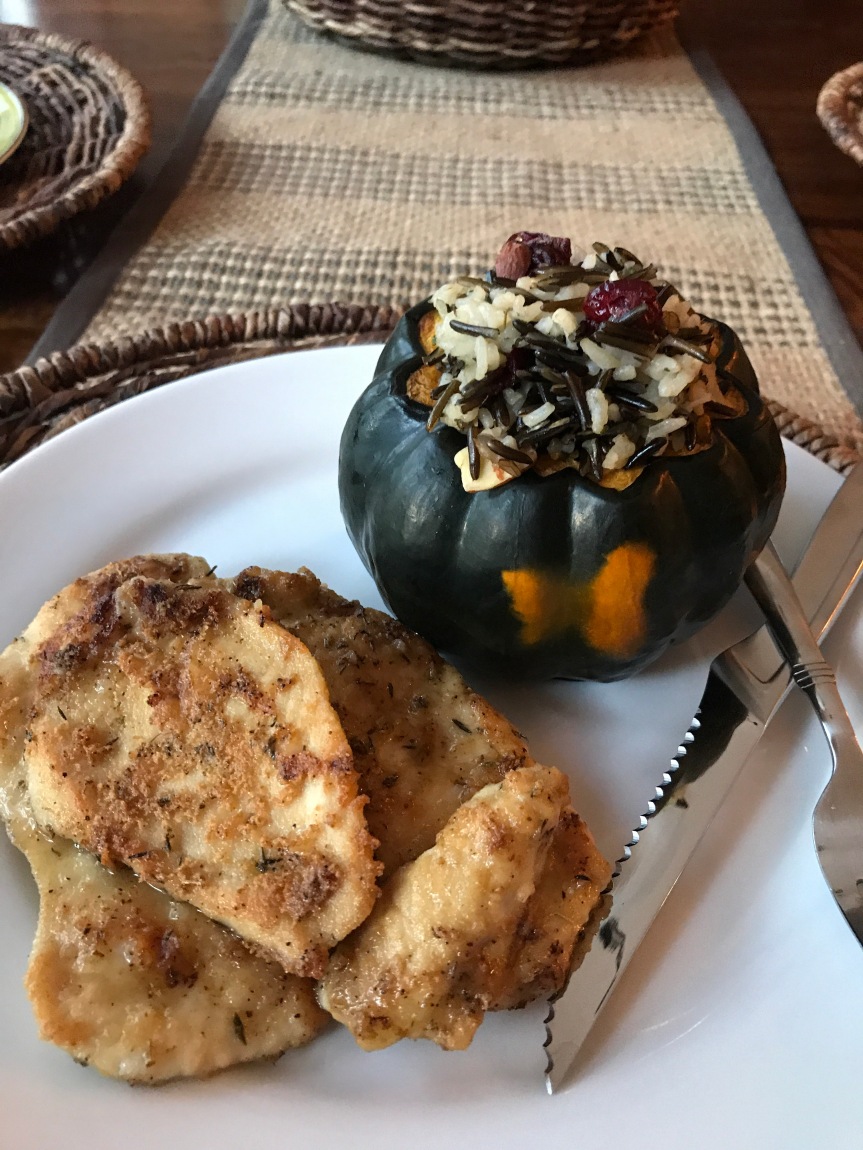