Split pea soup.  Let’s be completely honest:  it’s not pretty.  It tastes delicious, but for some reason, it just doesn’t take the best photos.  But the ingredients that go into it?  Lovely. 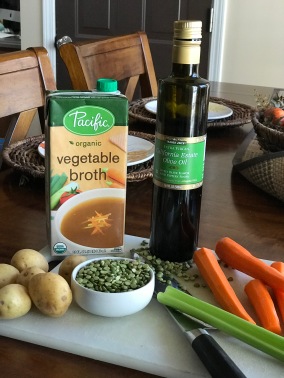 I’ve been in soup-mode for a few weeks now:  beef stew, dairy-free potato soup, chicken & veggie…I’m not sure what inspired the split pea soup, but I wanted a soup that could slow cook in the crockpot all day Saturday so when we wrapped up our chores over at the house we’re remodeling, we could dig into something hot, hearty, and ready.

This version is vegetarian, however I know a lot of folks like ham in it, so I don’t see why you couldn’t throw some ham in there with the peas.  Personally, I like it without and find it just as filling/satisfying as a vegetarian soup.

Start by cooking the onion in some olive oil on the cooktop, throwing in some white wine to reduce before adding the other ingredients.  I have a Ninja slow cooker which has a “stove top” mode so you can actually pre-cook ingredients like onion or brown meat in the slow cooker without having to use a separate pan on a cooktop!  There’s not a lot of different herbs and spices in this recipe; the veggies, garlic, and bay leaf are really all it needs.  I used veggie broth, but chicken broth also works if you aren’t going for a vegetarian version. 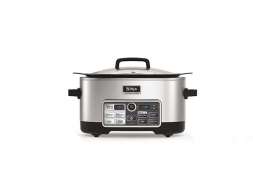 Cook the onion in olive oil over medium high heat until soft and golden.  Add the garlic, stir and cook another 30 seconds, then add the white wine and let it cook down about a minute.  Scrape the onion mixture into the slow cooker, then add the dried split peas, stirring to coat the peas.  Add the potatoes, carrots, and celery, then pour the both over the veggies.  Throw in the bay leaf and some salt and pepper, then cover and cook on low for 6 hours.