After returning to our hotel to retrieve our luggage and change into our raincoats, we caught a taxi and headed to the train station where we purchased tickets to Rome.  Even though the Florence train station is a bit more hectic than the others we had been in so far, we still had a flawless experience.

The ride from Firenze S. M. Novella to Roma Termini is just 1 ½ hours.  Don’t book a ticket for the 3-hour trip!  That train makes lots of local stops, which is why it takes twice as long.  There are two train stations in Rome, Roma Tiburtina and Roma Termini.  Termini is the main train station, and where we landed for our final leg of the trip. We had an Airbnb reserved in a neighborhood centrally located so we could walk to most of the sights we wanted to see.  Our host was kind enough to give us very specific directions whether we arrived via taxi, bus, or subway.  We took the subway which was very easy, fast, clean, and cheap. It was only a couple euros for the ticket, which stopped about 4 blocks from our flat.  The metro ticket we purchased was good for 100 minutes, and apparently we could have used it on a bus as well if we needed to.

Tip:  Keep your belongings secured; we heard that there are lots of pick-pocketers in Rome, but personally didn’t experience any problems.

While our first Airbnb in Bologna was a sleek, modern, Ikea inspired space, this flat in Rome was charming, warm, and the perfect mix of old Italy with updates.  It was on the second floor, so we did have to haul our suitcases up a staircase, after rolling them 4 blocks, but the space was large and comfortable with a living room, kitchen, large bedroom, and bathroom.  Our host left us wine, pastries, milk, and juice, and gave us a thorough overview of Rome with a map and list of attractions.  She was adorable.

It was 5:30 in the afternoon before we hit the streets, knowing we only had that evening, plus the next day to explore.  I knew that it wasn’t going to be enough time to see everything, but we made the most of it. We started with a walk to the Pantheon from our flat, which took about 15 minutes.  At this point, we were used to navigating the twisting and turning old sidewalks through Italy, using a combination of Google Maps on my phone and a paper map.  I figured the Pantheon was going to be just another old building, so I was not prepared for the magnificence of it as we rounded the corner and saw it from across the square.  There is something just jaw dropping about seeing a big, solid structure that has been standing there for over 1,800 years!  It’s the oldest building I’ve ever seen, and while it doesn’t boast intricate architecture or beautiful paintings, it is just as amazing as the other places we saw in Italy.

We had dinner reservations at a wonderful little restaurant called La Francescana about a 30 minute walk from the Pantheon (I used the Fork app to make the reservations).  On our walk there, as we crossed back over the river we passed by (but didn’t go in) the Museo delle Anime del Purgatorio, which is a beautiful gothic church, and the massive Corte Suprema di Cassazionebuilding.  This building is incredible in that it looks both imposing and beautifully artistic all at once.  La Francescana was fabulous and another perfect Italian meal.  Again, I went with the house wine and wasn’t disappointed – it was wonderful.  We started with the mussels which, we both agreed, were hands down the best we’ve ever had.  I’m afraid that I’ll be disappointed in mussels next time I have them here in the States.  They were so fresh, not at all gritty, and the texture was perfect.  And the broth? Oh my goodness, I couldn’t stop sopping it up with the crusty bread.  Chip had carbonara and immediately fell in love with the dish.  I had Amatriciana which is a red sauce with little bits of pork cheek in it.  It was fabulous.  As usual, the pasta was cooked to perfection and we stuffed ourselves to the point of skipping dessert. 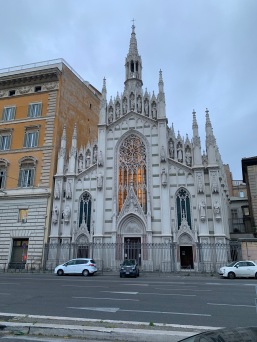 On our way back to the flat, we decided to stop for a cocktail at a swanky, trendy little place Fuoco where I had a delicious bourbon cocktail that had some freshly ground espresso beans on top of a light foam.  Sounds weird, but it was so good, and the perfect after-dinner drink.  We ended up chatting for a while with an American couple who had just flown in that day for vacation then sauntered back to our Airbnb for bed.  But, of course, not before stopping at the lovely little wine bar next door to our building for one last drink.  The wine bar, Kiarotti, was fabulous and we ended up going back a couple more times before departing.  In fact, we bought 6 bottles of wine the next night and they carefully packed it up for us to take home. 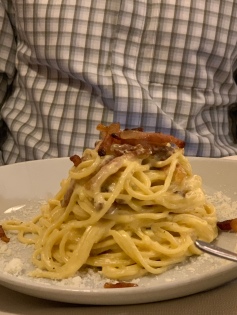 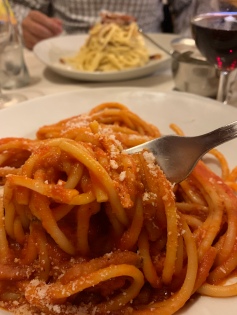 Unfortunately, for our last day in Italy, the weather wasn’t great, but we had good rain coats so we made the most of it.  It was really bad early in the day, and we were seriously thinking we were not going to be able to see much, but thankfully it let up after lunch.  We had a quick bite to eat at a café (more sandwiches and spritz!) then headed out to see Trevi Fountain, The Spanish Steps, and the Vatican.  We were smart this time and made reservations for the Vatican, so we knew we would be able to get in at a specific time.  Our reservations weren’t until the afternoon, so we started out toward the Spanish Steps. The steps are in the Piazza di Spagna and climb to a church at the top called Trinitá dei Monti.  Piazza di Sagna is super busy with lots of people everywhere, including the scammers who try to get you to buy a rose (do not take a rose!).  There is a beautiful baroque fountain in the center of the piazza that looks like a sunken ship, called Fontana della Barcaccia.  The Steps really are lovely and we climbed to the top so we could see the view. 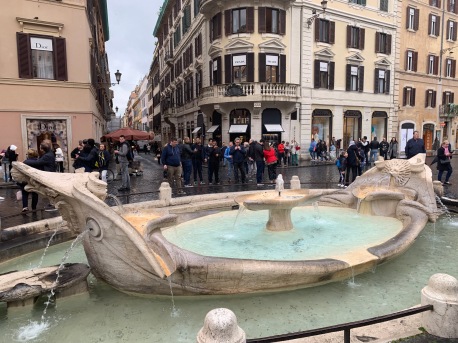 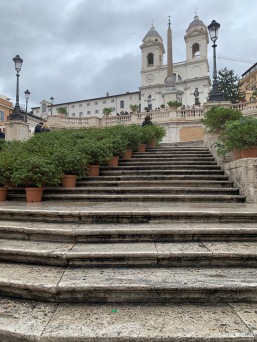 One of the problems with all day exploring in a city is where to find a rest room when you need one. By the time we got to the Spanish Steps it had been about 30 minutes since we stopped for lunch, and I didn’t use the ladies room at the café, so I really needed to go at this point.  I ended up going inside the large McDonalds here and, wow.  This is the biggest McD’s I have ever been in.  We didn’t eat here, I just needed a ladies room which became a 20 minute excursion. The place is huge and it took awhile to find the bathrooms which were upstairs in the back.  Then I had to wait in line forever!  It was nuts.  But it was clean and modern, so there’s that. 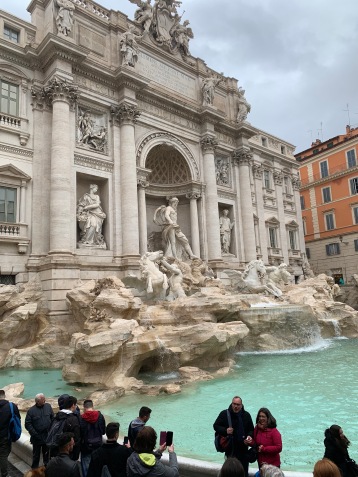 From here we headed towards Trevi Fountain.  This fountain is spectacular!  It’s very difficult to get a decent picture here because there are so many people and it is so crowded.  I do wish I had whipped out the selfie stick to get a picture of us here, but I didn’t. We did, however, toss a coin into the fountain for good luck.  At this point, we needed to find a taxi to get us to the Vatican in time for our pre-paid entrance, so we made our way to a street and easily found a taxi driver who got us to the Vatican within 15 minutes.

We were dropped off in what appears to be the front of the Vatican, where there are lots of people trying to sell tickets and skip the line passes.  We ignored all of them and tried to find the entrance, however it took forever for us to figure out how to get in and where the entrance was.  It turns out, we were dropped off on the exact opposite side of where we needed to be.  Another 15 minutes of walking and we were finally in the correct queue for pre-paid tickets.  You have to go through security, which is a bit chaotic, then you must exchange your prepaid voucher (or email code) for the actual tickets.  Then you just follow the herd through the halls, stopping to admire the tapestries, sculptures, and art along the way as you make your way to the Sistine Chapel.  This self-guided tour takes approximately 45 minutes or longer depending on how much time you spend admiring the works of art. 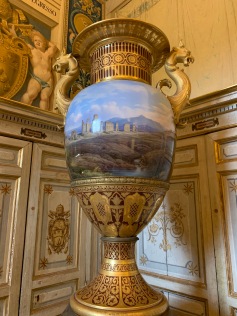 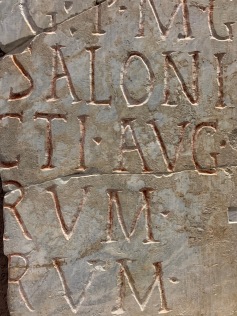 The Vatican Museums are full of amazing works of art, and the Sistine chapel is indeed beautiful, but it was so crowded, and the guards seemed intimidating, it was more exhausting to me than enjoyable.  However, this was the last day on our vacation, so maybe I was just tired from all of the touring we had done up to this point.  We joked about “exit through the gift shop” as we were making our way toward the exit, and there are several gift shops, just in case you didn’t buy something in the first two, you can get something in the next few!  We bought a couple books and a decorative collectors plate.

For our final night in Rome, we wanted to go back to Francescana’s since we had such a wonderful meal, but they were booked for the evening, as were the next 3 restaurants we stopped at.  Tip: make dinner reservations!  We did find a wonderful little place called Pupina where we enjoyed a final meal of fresh pasta.  Again, typical good service, good wine, and outstanding food for a very fair price.  Dining in Italy is truly special! 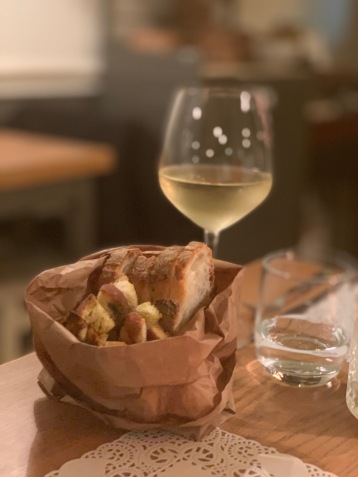 One problem with staying in an Airbnb versus a hotel, is getting a taxi early in the morning to get you to the airport.  Luckily, our flat was across the street from a Le Meridien hotel, and the concierge was super friendly and got us a taxi in less than 10 minutes, even though we were not guests at the hotel.  The ride from our area of Rome to the airport took at least 30 minutes, so make sure you plan enough time to get there.  There are two airports, Leonardo da Vinci at Fiumicino , and Ciampino.  We departed from Leonardo da Vinci, which is a beautiful airport – clean with plenty of places to dine and shop.  Make sure you know which terminal you are departing from (it depends on your airline).  We departed on United, and checking our bags was fairly easy, as was going through security.  We had plenty of time, arriving early, so we enjoyed a bite to eat and did some last minute shopping.  The food in the airport is typical Italian food, with fresh sandwiches and pizzas as well as good coffee.  We had no problems boarding our flight, and were soon on our way back to the U.S. after an absolutely lovely time in Italy. 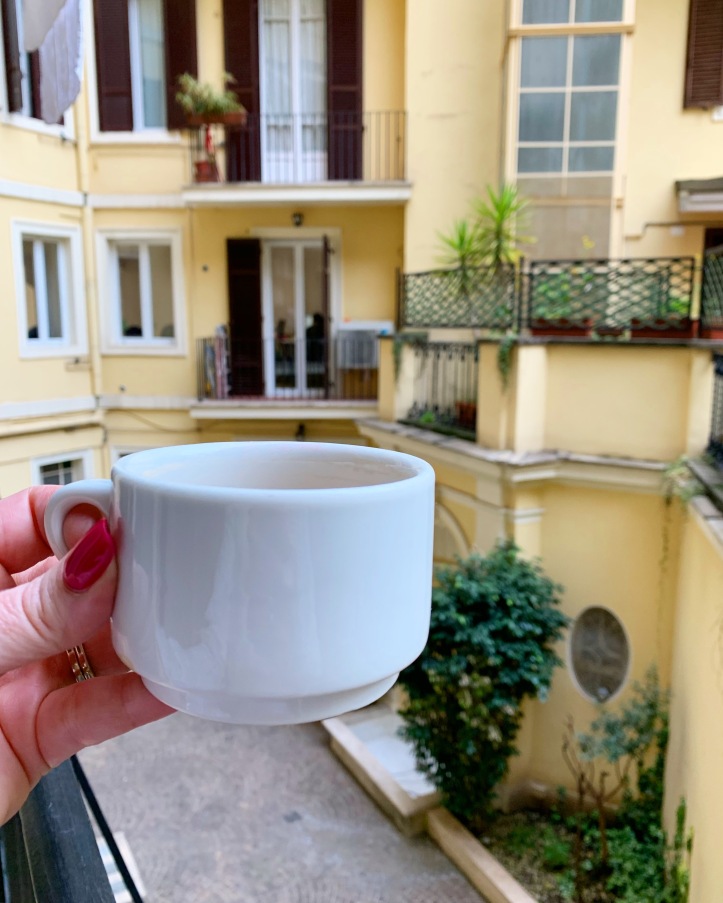