Is it even Thanksgiving if you don’t have pie?  I’m sure there’s a few of you out there who don’t dig pie and maybe prefer cake or ice cream, but pie is just as much a part of Thanksgiving as the turkey itself. 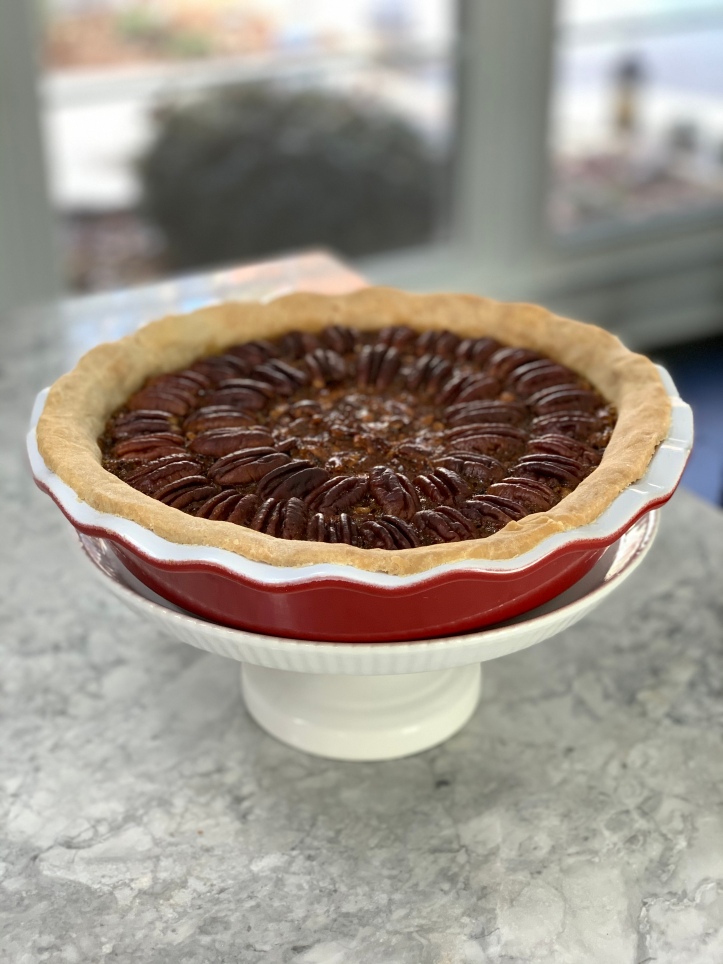 If you’ve been following me, you know that I do a lot of dairy-free and gluten-free cooking for my husband, who suffers from some digestive issues that are aggravated by eating gluten, dairy, corn products, and anything spicy.  So, as you can imagine, this makes Thanksgiving a bit of a challenge at my house.

Over the years, I’ve sort of just “figured it out,” but this year I discovered some products – some new product,  some old – that have made the preparation a lot easier, and a lot tastier!  First, can we talk about Nestle Carnation’s new diary-free “evaporated” almond milk product? This stuff is amazing, and I’ve only been using it now for about 4 hours.  Unlike the almond milk we keep in the fridge for cereal, this stuff is not sweet, and it’s a little bit thicker/less watery than regular almond milk, making it perfect for cooking and baking. 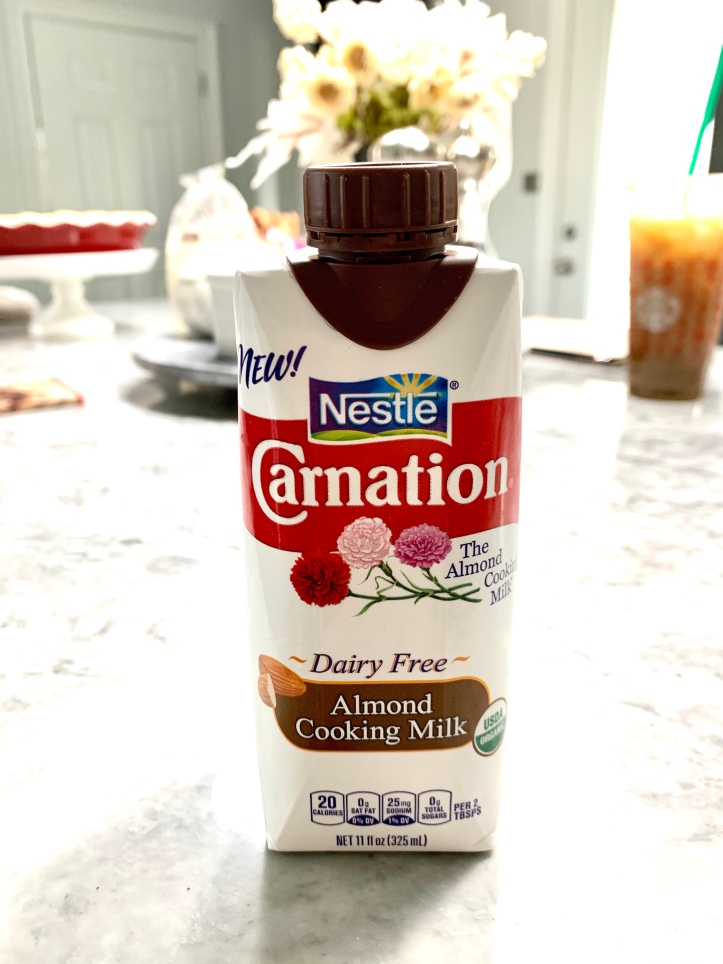 I used it to make homemade cream of mushroom soup for the green bean casserole (link for the recipe coming soon!) and I used it in the pumpkin pie recipe.  The difference in using this versus “normal” almond milk is amazing – it’s almost like “real” dairy.  It’s creamier consistency is perfect and since it’s not sweet, you don’t get that weird sweet vanilla flavor in your savory dishes.  This will be a staple in my pantry from now on.

I chose to do a “slab pie” for the pumpkin pie this year, since people often want “just a sliver” because they are either too full from dinner, or want a piece of pecan pie as well.  I cut the pumpkin slab pie into squares and we topped it with dairy-free Reddi-Wip Almond Milk whipped topping. 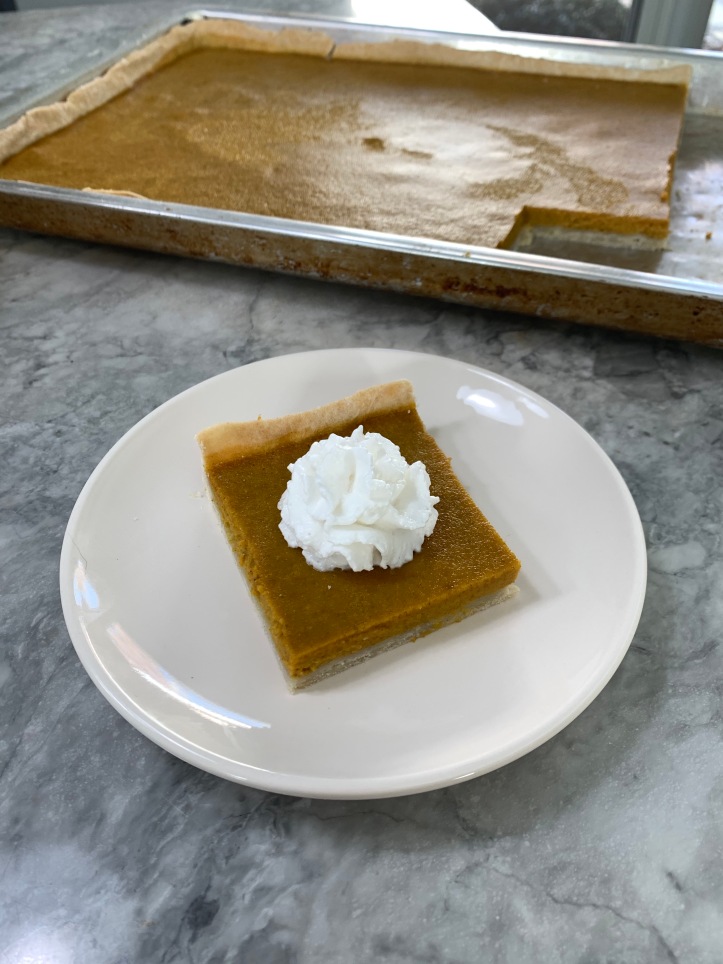 Finding a good pecan pie recipe that doesn’t use corn syrup was more of a challenge, however one day I was grocery shopping and stumbled upon a can of Lyle’s Golden Syrup in the baking goods aisle.  I was so excited to find this!  I decided this would be perfect for pecan pie.  Coincidentally, about a week later one of my favorite food bloggers/Instagrammers, posted a recipe for a pecan pie that uses golden syrup.  I was giddy with excitement!  Check out her recipe here!  It is so good.  I only made 3 modifications:  1.) I made my own gluten-free pie crust recipe (below), 2.) I used butter flavored coconut oil instead of butter to make it dairy-free, and 3.) I used part chopped pecans and part whole pecans.  I like to use the whole ones on top in a circular pattern, with the chopped ones in the “body” of the pie. 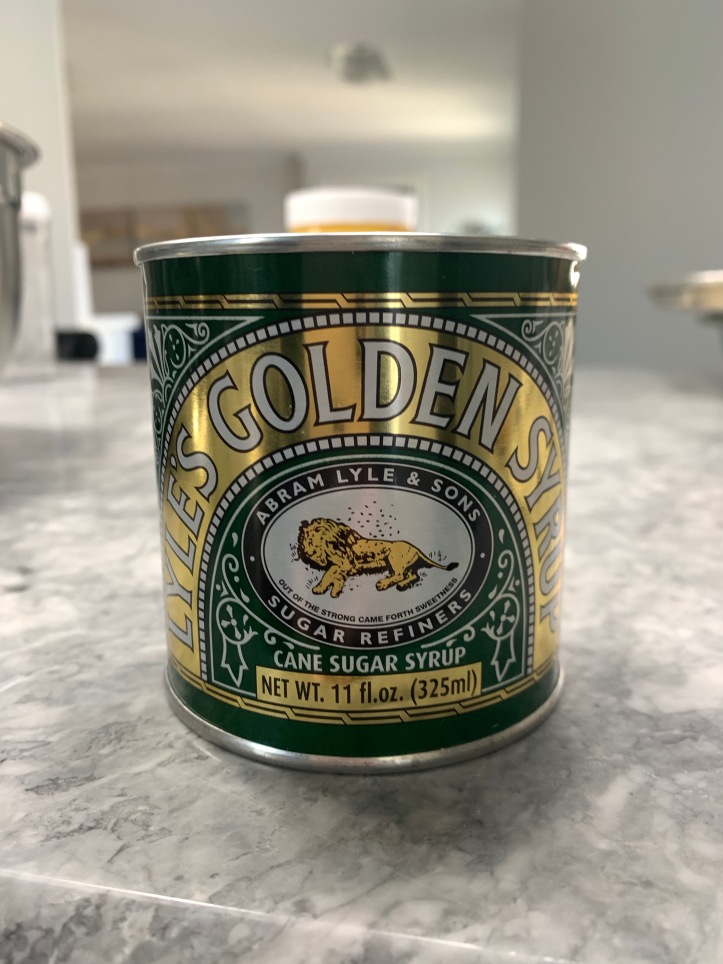 I included Smitten Kitchen’s recipe below, along with my gluten-free pie crust recipe and the recipe I used for the pumpkin pie.  I used 1 whole recipe of the pie crust for the pumpkin slab pie, and I used 1/2 a recipe for the pecan pie.  The gluten-free pie crust dough is difficult to handle, so you’ll need a little patience.  Roll it out, get it into the pan, the press it into place.  Don’t panic if it falls apart – you can work with it in the pan.

Sift flour, salt, and sugar together in a large mixing bowl.  Cut in the coconut oil with a fork or pastry blender until the ix is crumbly or resembles small peas.  Using a fork, mix in the beaten egg until well incorporated and it starts to form into a dry crumbly dough.  Slowly add water, one tablespoon at a time, until the dough is no longer crumbly and holds together.  It should be slightly sticky, but not too sticky.  Form the dough into two balls; place one in the fridge covered in plastic wrap to use for another pie*.  Place the other half on a large piece of parchment paper, lightly sprinkled with gluten-free flour and gently roll out the dough into a large circle.  Don’t make it too thin or it will fall apart.  Gently slide the dough over a glass pie plate and pull back the parchment paper.  Don’t panic if pieces fall apart during this step, simply press the dough into the pie plate and up the sides, forming a nice looking crust.

*Follow your pie recipe to determine if the pie crust should be pre-baked before adding the fillings.

Par-bake the crust: [Optional, but will lead to a crispier base.] Heat oven 400°F (205°C). Line frozen crust with lightly buttered or oiled foil. Fill with pie weights, dried beans or pennies. Bake on a rimmed baking sheet for 20 minutes. Carefully remove foil and weights and let cool a little before filling.

Prepare filling: Spread pecans on a rimmed baking sheet and toast in the oven for 10 to 12 minutes, stirring once or twice so that they toast evenly. Set aside until needed. If you like smaller bits, you can chop them, or as shown here, chop half of them (although I usually leave them whole).

In medium saucepan, combine butter, brown sugar, golden syrup and pinch of salt. Bring to a simmer over medium heat and cook for 2 minutes, stirring. Remove from heat and stir in pecans, cider vinegar, vanilla and bourbon (if using). Pour into a bowl (so that it cools faster) and set the mixture aside to cool a little, about 5 to 10 minutes. Then, whisk in one egg at a time until combined. Pour mixture into prepared pie shell.

Bake: For 40 to 45 minutes. The pie is done with the edges are set and puffed slightly and the center is slightly firm to the touch but still has some jiggle to it. Cool on a rack. Serve slightly warm or room temperature.

Prepare the pie crust, rolling it out and pressing it into a 10 x 15 rimmed jelly roll pan, pressing the dough up the sides.  No need to pre-bake it; set it aside while you prepare the pumpkin filling.

Put the sugar, eggs, salt, and pumpkin pie spice into a bowl and whisk for about 2 minutes, until the mixture starts to look fluffy.  Whisk in the pumpkin puree until incorporated, then whisk in the evaporated milk.  It helps to use a deep mixing bowl, so the liquid doesn’t slop over the sides while you are whisking!

Pour the filling into the dough lined pan and very carefully place on the center rack of a pre-heated 375 oven.  It’s easy to spill this, so move slowly.   Bake for about 35-45 minutes or until the center is set.  Allow to cool, then cut into squares to serve.  Refrigerate leftovers. 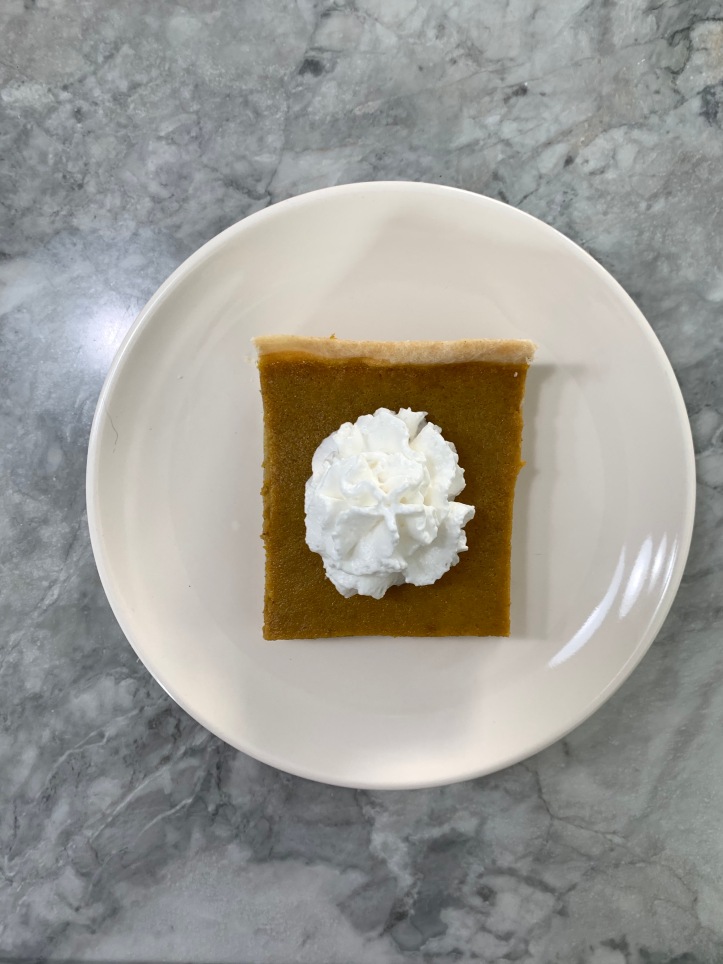