Last May, I wrote about some of the shows I had been binge-watching (check out my post here) and provided recommendations on my favorites.  Since I have once again realized that I spend an incredible amount of time watching TV, I decided to update my list with what I’ve watched over the past several month.

I don’t feel guilty about my TV habits, either.  I read a lot of books (you can check out my 2018 Reading List, 2019 Part 1, and 2019 Part 2 reading lists), my house is clean, and I even exercise on a regular basis.  In fact, I added exercise into my TV routine this winter.  I watched every episode of The Crown Season 3 at the gym, on a treadmill.  I averaged over 3 miles per episode!  I’ve been watching other shows at the gym as well, and find that the time doing cardio goes by so much faster when I’m watching a show I like.  So don’t call me a couch potato, because that is about the furthest thing from the truth!

In this season, Olivia Coleman now plays Queen Elizabeth.  Claire Foy was fabulous in the first two seasons, but the transition was needed to “age” Her Majesty appropriately.  Coleman is a wonderful actress; I really enjoyed her in the series “Broadchurch” (available on Netflix), and the movie The Favourite.  This season is really good, and as usual, I found myself Googling the characters and events to get the background story on what really happened during that time.  Highly recommend.

Confession:  I kept hearing this was fabulous, but chose not to watch it because I thought it was going to be some cheesy musical-like show.  Oh, how wrong I was!  Set in the 50’s-60’s, Mrs. Maisel is a young, beautiful divorcee trying to pursue a career in stand-up comedy at the dismay of her overbearing Jewish parents.  The show is hysterical, the costumes are superb, and the witty, face paced dialog is delivered by a top notch cast.  If you need something to make you laugh, give this a whirl.

I was a HUGE Breaking Bad fan when it was on TV, so when the movie El Camino dropped, I was excited to get back into the world of Jesse Pinkman.  Of course, with the movie available, the Netflix, AMC ran a Breaking Bad marathon.  We didn’t re-watch all of the series, but caught a few episodes which refreshed our memories of things that had happened that we forgot about (helps to do this before you watch El Camino instead of after).  Anyway, that whole thing led to us picking up Better Call Saul, which is actually a prequel to the Breaking Bad Series.  It tells the story of how Saul Goodman became Saul Goodman (because his real name is Jimmy).  Good series.

My sister recommended this to me a few years ago and I never picked it up, but decided this winter that I really needed something light-hearted and funny, given I watch a lot of dark stuff.  Well I wish I had taken her advice sooner because this is probably the FUNNIEST television series I have ever watched.  I’m not exaggerating.  Created by father-son team Eugene and Daniel Levy, Schitt’s Creek is the story of a super-rich family who loses everything and must live in a motel in a town that the dad, Johnny Rose (Eugene Levy) purchased as a joke.  I guarantee that Johnny, Moira, Alexis, and David Rose will make you laugh every episode.  Seasons 1-5 are available on Netflix, however Season 6 isn’t there yet, but you can watch individual episodes for $2.99 through all the usual services. Worth every penny!

The new season of You didn’t disappoint.  Everyone’s new favorite serial killer, Joe, is back and up to his usual antics.  He’s like a young Dexter, but is more likable (and makes more mistakes).  This series is pretty easy to knock out in a couple of days. 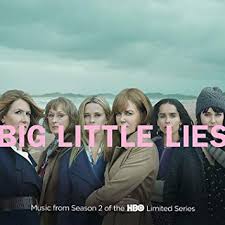 Some of my favorite actresses (Reese Witherspoon, Nicole Kidman, Shailene Woodley, Laura Dern, Meryl Streep) lead this dark comedy/drama about a murder in Monterey, CA.  The group of friends all have something to hide, and find themselves tangled in a web of lies while trying to protect their families.  Laura Dern’s portrayal of an over-the-top attorney is so good, and her temper tantrums had me laughing out loud.  Two thumbs up!

Based on the book by Gillian Flynn, this 8 episode limited series is a dark psychological thriller, beautifully shot with great performances from Amy Adams, Patricia Clarkson, Chris Messina, and Eliza Scanlen.  Amy Adams plays an alcoholic crime reporter who returns to her hometown to investigate the murders of two girls.  When she “reunites” with her estranged family, she is reminded of her traumatic past and as she uncovers more pieces of the puzzle, she realizes how her past and the recent crimes are intertwined.

OK, back to dark…super dark.  When it comes to American Horror Story, the writers have a great way of tying old seasons into the new seasons and Apocalypse is another excellent example of tying loose ends into nice little bows.  I honestly didn’t dig the first couple episodes, but as usually they kept getting better, with new twists along the way.  All the regular suspects are back  in new and glorious ways, but also in their old ways and up to their old antics.  If you’re a fan of AHS, don’t miss out on this season; one of the best.