I’ve mentioned it before:  I’m not a good gardener.

I can bake like a pro.  I can decorate a house.  I can cook, and craft, and plan a party. I can even put together fashionable outfits.  But there are two things from the Martha Stewart School of Homemaking that I fail at:  sewing and gardening.

We’ll ignore the sewing one for now, because there’s no reason for me to fail so miserably at it, considering most of the women in my family can sew (my grandmother was a wonderful seamstress, my mom made my cheerleading team skirts, my prom dress, quilts for my daughters, and more, while my sister can create theatre costumes without a pattern).

But the gardening one – it’s not from lack of trying.  And I’m not a complete failure.  At our previous house I managed to get a good rotation of perennials going in the front flower bed, and I could keep my hanging ferns alive on the porch from April to August, but that’s about it.  When we moved to our new place, on five acres of land, I vowed to get better at gardening.  There were already several lovely plants and trees, some that had been neglected for many years, some that were growing like crazy, so I knew I had a real shot at it.

I was delighted when our blueberry bush produced lots of sweet berries this spring, and even made a couple batches of blueberry muffins.  And our fig tree is actually a bit out of control; it is huge!  I was able to beat the squirrels to enough figs that I was able to make a small batch of jam, and enjoy some on ricotta toast for breakfast as well as take some to a party as part of a charcuterie tray I put together.  But the blueberries and figs existed long before we bought the property so I really couldn’t take any credit for their success.

In the back patio area by the pool, there is a square raised bed that I thought would make the perfect herb garden, as it is easily accessible from the kitchen.  Unfortunately, it had a large tree stump smack dab in the middle of it.  I was able to take a hatchet to the roots and dig up a good portion of the old stump, then decided what remained of it would have to stay – I could plant around it.

I decided to plant lavender, rosemary, basil – both Thai and regular, mint, chives, thyme, oregano, sage, dill, cilantro, and parsley.  Sadly, the dill, sage, cilantro and chives did not survive.  Something continually ate the chives until they were no more, and it was just too hot for the dill and sage.  I didn’t feel bad about the cilantro because I have several friends who are good gardeners who have failed at cilantro, so I’m going to assume it’s the soil and/or climate here in GA.

The biggest success was the Thai basil – that thing ended up being a monster of a plant.  It smells so good – I have used it in cooking, and also made a batch of Thai basil pesto that I put on rice noodles. My regular basil didn’t do quite as well, but it did OK, and produced enough fresh basil for salads, and enough to dry and grind for later use.  In fact, I’ve dried a little bit of all of the herbs, ground them, and put them in bottles in my spice drawer – and I can tell you there is definitely a difference between the store-bought and the fresh.

Besides the herbs, I had plenty of room in my garden for a few other smaller plants, so I added a sweet red pepper plant, a jalapeño plant, and a grape tomato plant.  The grape tomato plant didn’t die, but it never grew beyond it’s initial size, nor did it produce anything.  The jalapeño plant, however, produced LOTS of peppers.  I gave some away, but I was also able to pickle some of them.

I didn’t have enough to actually “can” them, so I made “refrigerator pickles,” the kind you keep in the refrigerator and are not shelf stable because the jars weren’t processed and sealed.  The recipe is easy, quick, and the results are delicious:  slightly sweet and tangy along with the heat of the pepper.  Just remember when working with jalapeños, to wear food service gloves, or thoroughly wash your hands afterwards.  The hot stuff will linger on your hands and if you rub your eyes, well, it’s going to hurt!  You also want to make sure you are in a well ventilated area, because inhaling the airborne jalapeño juices will send you into a fit of coughing. 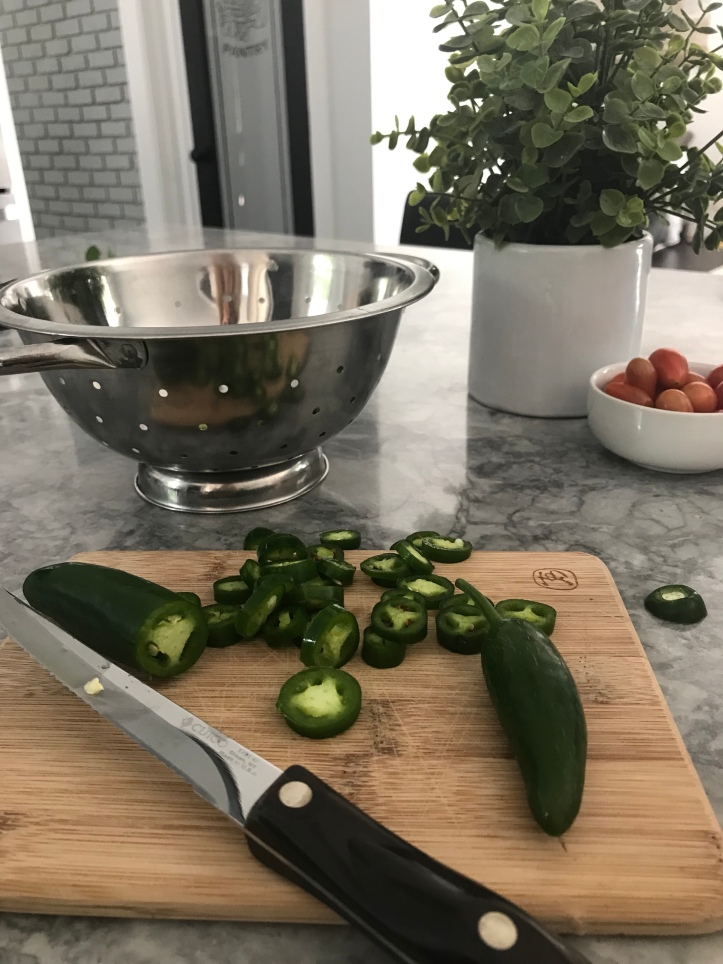 Wash and slice your jalapeños.  In a small saucepan over medium heat, combine the vinegar, water, sugar and salt, stirring until the sugar and salt are dissolved.  Bring to a boil, add the garlic and jalapeños and immediately remove from heat.  Allow the jalapeños to rest for about 15 minutes.  Once cooled, using a slotted spoon or tongs, place the jalapeño slices in a clean glass jar or other container, then pour the brine over them.  Cover and keep in the refrigerator for 60-90 days.  They are great on nachos, quesadillas, tacos, burgers, omelets, and more!