Stop Being So Judgmental

Have we always been such an opinionated and judgmental society?  Or has the rise of social media just made it easier to both voice our opinions and cast judgement?

I love to share – I share pictures, recipes, travel stories, thoughts, and, yes, opinions.  Not everyone cares, and people don’t always agree, but that doesn’t matter to me.  I’m not out to change the world via Twitter or seek affirmation from Facebook followers – I just like to share.  I blog because I enjoy writing, and it gives me an outlet to share in a little more detail and depth than a Facebook or Instagram post.  I equate this kind of sharing to journaling or writing in a diary.

Does everyone remember what Facebook was originally?  A “face book” is just a student directory with pictures of the students and some basic information – that used to be printed on paper.  When Facebook started online, it was originally only open to college students.  They eventually opened it up to everyone with an email address, then companies joined, then news started appearing, and apps and games, and next thing you knew your grandma and kids were all there – to do what?  Interact with each other. It was a great way to stay in touch with family and friends who you may not get to see very often.

It seems like finding old friends, staying in touch with family, and posting cute puppy photos has sort of taken a back seat to complaining, debating, and judging.  People in general are much bolder online than in person.  It’s so easy to have a comeback when you have time to think about it and type it out.  It’s easy to state your opinion because there is no one present to interrupt you – you have the floor and as long as you have enough characters available, you can type out as much as you want.  And that opens the door to others commenting and replying – and they don’t get interrupted either; they can go on and on as much as they want.  When you are in the comfort of your home in front of your computer screen, or on your mobile device, there’s no risk of someone punching you in the face for being an asshole – you can asshole your way through the day if you choose to.  It seems like a lot of folks are doing just that.

Let’s be honest: humans don’t need to be encouraged to be jerks; it comes naturally for many people.  I believe that social media not only provides a platform for all voices to be heard (both good and bad), but also emboldens people by encouraging them to participate.  We’ve gone from simply connecting with people to large scale wars with words in about 60 seconds, including everything from petty complaints to threats against entire nations.  What the hell has happened to us? 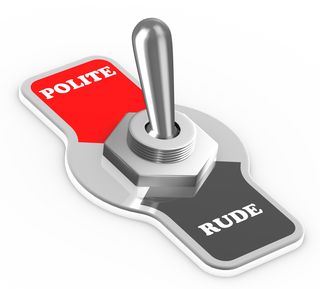 Guess what – while everyone may be entitled to his or her opinion, that doesn’t give us carte blanche to attack others or to be rude, vile, or heartless.  What happened to “If you don’t have something nice to say, don’t say anything” or following the Golden Rule?  If you don’t like what someone posts, SCROLL ON.  If you find someone annoying or offensive, don’t follow him! If someone posts something that you don’t like, you don’t have to engage in a comment section fight – just let it be. I learned long ago that I will never, ever change anyone’s mind by what I post on my feed or say in the comments section.  Do I retweet political stuff?  Of course I do – because I like to state my opinions as well as show support to the original poster.  But do I think that a tweet or a FB post will change the mind of a Trump supporter?  Of course not.  The constant back and forth is a colossal waste of time.

Everyone wants everyone else to see their point of view, but no one wants to look through the eyes of someone on the opposite side.  Funny how that works (or doesn’t work).  Everything is so polarizing, it’s like we’ve lost all sense of a middle ground. Everything is political, and God forbid you make a mistake in public, because you will be publicly shamed via cellphone pictures or videos.  Should we call attention to wrongs, injustices, and law breaking citizens? OF COURSE WE SHOULD.  I’m saying let’s stop being petty, and also try to see the other side, try to understand why someone said what she did, and why you feel so differently, then agree to disagree.  Isn’t that more productive than launching accusations and insults? 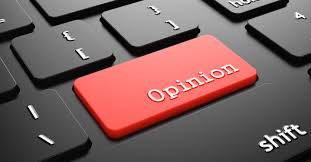 I had to stop and check myself the other day.  I was super annoyed while waiting in line at an office supply store.  All I needed to do was pick up an online print order and I ended up waiting for 17 minutes, which is pretty ridiculous.  I started typing a rant on this business’s Facebook page about it and I stopped, realizing that what I was writing wasn’t going to improve the current situation, wasn’t going to prevent it from happening in the future, and most likely would piss someone off and make me look like a complaining bitch.  I deleted it and continued to patiently wait.  It wasn’t the end of the world, after all.

And while I will continue to post political opinions to my social media accounts, I’m not trying to change anyone’s mind.  I know that my belief in a woman’s right to choose what to do with her body will never change the mind of someone who thinks pro-choice people are baby killers (we’re not).  I am respectful of the other side and don’t engage in fights about it.  I know that my belief in the right to peaceful protest against injustice will never change the mind of someone who thinks that certain football players are disrespecting the nation/anthem/flag/veterans when in fact it has absolutely nothing to do with any of those four items (it’s actually about injustices suffered by black people in this country).  I choose not to engage with those folks; there’s no need for a fight.  People burning clothing of a certain brand won’t make me hate the brand or suddenly change my mind because those folks have the right to protest as well – some kneel to protest, some light things on fire.  I happen to boycott a certain craft store and fast food chicken place because of their stand on LGBTQ rights and women’s health but I know that many of my friends spend their money at those places and I don’t judge them for it.  It’s their choice.

I’m not a social media evangelist – I’m just a gal, posting about stuff that interests her.  If you like it and agree, awesome!  If you don’t, that’s cool too.  All I ask is that we stop being so judgmental – pause and ask yourself if the comment is necessary, if it’s helpful, or if it is just argumentative, hurtful, and rude.  Let’s all practice #tolerance and #kindness for a change.

Greek Frittata with garden fresh tomatoes and cucumbers; spinach, kalamata olives, sheep’s milk feta, Greek seasoning. #theresaskitchen #theresasgarden #eyesonthegoodlife
More blooms around the Goodaker Ranch! #summerblooms #theresasgarden #hydrangeas #hibiscus
Mixed veggie rice pilaf with fresh basil & pistachios and chicken meatballs in a white wine chicken broth gravy. So good! I think of this rice as a way to clean out the fridge - use up your tired veggies that are dying to get out of the crisper drawers! Also if you only have small amounts from the garden (in my case exactly 4 green beans and one small zucchini) you can actually put them to use. I also used up 2 mushrooms, some leftover carrot & celery sticks, green onion and a lonely garlic clove. I diced up all the veggies and sautéed them in olive oil then added some salt and some leftover cold cooked rice. After it was heated through I tossed in garden fresh basil and chopped pistachios. The chicken meatballs are super easy: ground chicken, GF bread crumbs, Italian seasoning, garlic powder, onion powder, and a slash of Worcestershire sauce. Brown on all sides, add a splash of white wine, reduce, add a 1/2 cup chicken broth, bring to a simmer. Make the thickening by whisking 1/2 cup broth with gf or regular flour in a small bowl or shaker then whisk it into the simmering broth, whisking while it thickens.
Sushi night! 🍣 If I’m eating sushi I actually prefer nigiri or a chirashi bowl, but the Idol Roll from Yoon Sushi is my favorite roll. White tuna, salmon, avocado maki with spicy tuna, fried jalapeño, wasabi lime mayo, and eel sauce.
Pan Seared Branzino with Tomato Basil White Wine Sauce served with Farro. I promise my next post will not have tomatoes! 😂 when you pick a pint every single day for a week, well, you have to go with it! #theresaskitchen #theresasgarden #eyesonthegoodlife #branzino #gardenfresh
Taco Tuesday with Chicken & Rice Bowls. Homemade salsa with tomatoes picked this morning, homemade guac (sadly I don’t grow avocados), slow cooker chicken thighs seasoned with onion powder, garlic, chili powder, salt & pepper, jasmine rice, and black beans with corn and sweet red peppers that I picked this morning. #theresaskitchen #theresasgarden #eyesonthegoodlife #burritobowls #gardenfresh